The identification and history of flatback turtles in Western Australia.

Flatback turtles have a smooth shell with scales that don’t overlap.

They are an olive green colour on top and pale on the underside.

The scientific name Natator depressus comes from the Latin: Natator meaning swimmer and depressus meaning sunken or low, referring to the low, flattened dome of the upper shell (carapace). The length of the upper shell of adult female turtles is 88cm-98cm, this is known as the curved carapace length.

Our volunteers measure this length and also the width during monitoring activities.

There are seven species of marine turtle worldwide.  They can be identified by the pattern of the scales on their shell and head.

Check the Queensland Marine Turtle Field Guide for detailed pictures and a key to identifying the different species.

Use this interactive tool to learn more about the different body parts of flatback turtles as well as the pattern and names of the different scales on its body.

Link to popup   View the interactive (opens in a new window) 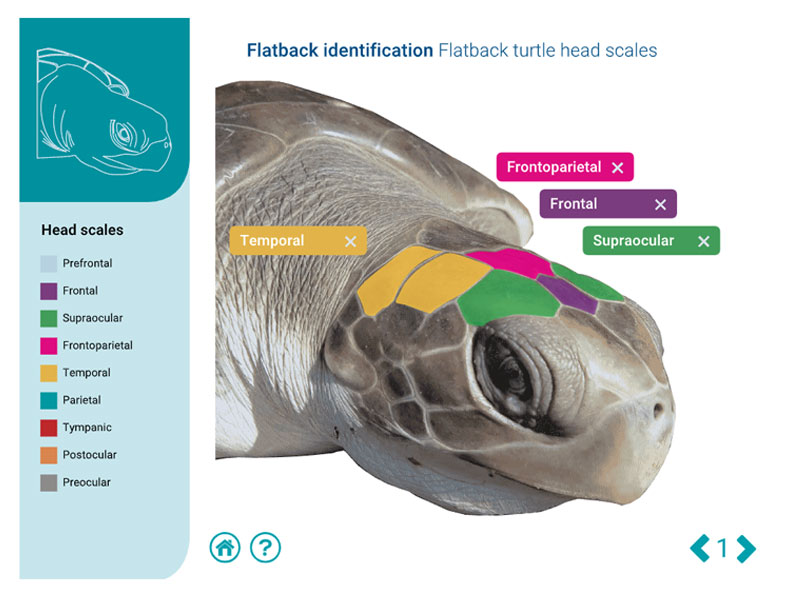 Lort Stokes first described the flatback turtle in his “Discoveries in Australia with an account of the coasts and rivers explored and surveyed during the voyage of H.M.S. Beagle In the years 1837-43  ”

DELAMBRE ISLAND
On the 27th [August, 1840] we crossed over to Delambre Island, on which a large party landed in the afternoon. A few turtle were here taken, of a different kind from any we had seen before, and apparently a cross between the Hawk's Bill and the Green Turtle.
- J . Lort Stokes

Although early explorers noticed flatbacks were a bit different to hawksbill and green turtles it took over 100 years for flatbacks to be officially described as a separate species.

Flatback turtles are a bit of a homebody compared to other turtle species, all recorded nests are in northern Australia, from the Pilbara and Kimberley in Western Australia through the Northern Territory down to southern Queensland.

Flatbacks feed in waters over the Australian continental shelf and as far as Papua New Guinea and Indonesia.

There are different breeding groups across northern Australia, so turtles from Western Australia would not usually migrate to Queensland.

Hatchlings feed on tiny animals in the water (zooplankton) and adults on soft-bodied sea creatures that live on the ocean floor such as sponges, soft corals, feather stars and sea pens.

Near-shore feeding grounds are 10-100m deep, whilst further offshore there are larger foraging grounds in the Kimberley between 50-100m deep.

So far most of the information on what these turtles eat is based on stomach contents of dead turtles that are found stranded on beaches.

Researchers can now put small satellite trackers onto flatbacks to see where they go to forage for food.

Using satellite tracking data from several female turtles, scientists can work out hotspots of turtle activity off the WA coast.

The WA Marine Science Institute (WAMSI) looked at marine life on the sea floor around these hotspots to find out what the flatback turtles visiting these areas might be eating.

WAMSI was able to get some great footage of the fauna on the sea floor using towed video.  For more information, and to see the footage, see these news articles:

What do flatback turtles in NW Australia eat?

What's on the menu for flatback turtles? 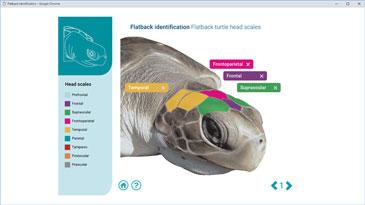 Flatback Turtles can be identified by the pattern of the scales on their shell. Use this interactive to explore the different body parts.