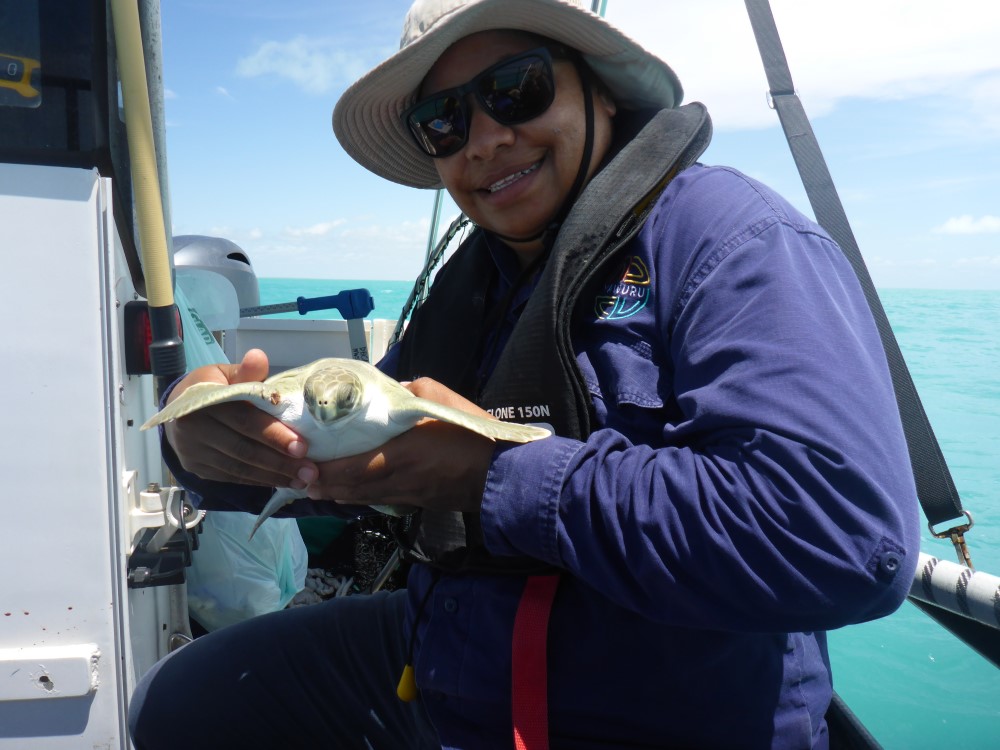 Foraging Flatbacks is a ground-breaking research project aimed to identify feeding grounds for flatback turtles and to try to catch turtles there to help answer questions we have on their biology and ecology.

In June 2018 Traditional Owners suggested investigating Roebuck Bay near Broome and DBCA scientists teamed up with Yawuru Aboriginal Corporation and the DBCA district office to successfully find aggregations of both juvenile and adult flatback turtles, including males, for the first time in Australia.

The scientists have also been able to test some cutting-edge technology. Some of the turtles were fitted with a daily diary – the equivalent of a ‘Fitbit’ for turtles and others with a camera so we got to see what a day in the life of a flatback turtle might look like.

After five successful trips during winter the scientists have concluded that Roebuck Bay is likely to be a significant feeding location for flatback turtles that nest across WA.

The flatbacks there are accessible via netting – or for the brave by jumping off the boat and catching them by hand!

So far over 60 turtles have been captured and tagged, some of these are ‘recaptured’ turtles – females that have been tagged previously after nesting at WA rookeries.

A strong partnership has formed between Yawuru Aboriginal Corporation and DBCA.

In February 2020 the first summer trip was conducted, during the Yawuru season Man-gala.

The water temperatures in the Bay were around 31°C, warmer than previous sampling periods, where it would have been 23-24°C.

This trip was equally as successful and ground-breaking as for the first time the team was able to observe and catch a number of post-hatchling, juvenile and sub-adult turtles.

These little guys were seen eating jellyfish that are larger than themselves and foraging along current fronts in the eddies.

For all species of sea turtle, the phase after entering the ocean as a hatchling until they return to coastal feeding grounds is the least known and is still referred to as  “the lost years”.

As technology has started to allow us to track these smaller turtles a picture is beginning to emerge that for most species the tiny hatchlings follow ocean currents out into the open ocean.

Scientists believed that flatbacks were a little different, and that they stayed closer to shore, on the Australian continental shelf.

Finding these smaller sized turtles in Roebuck Bay has given us an important piece of the puzzle of what happens to hatchling flatbacks between entering the water at their natal beach and coming back to nest decades later.

This information can be used to inform policies over marine park protected areas, as it is important to ensure protection of threatened turtle species occurs through other stages in their lifecycle, not just for nesting females, eggs and hatchlings on beaches.